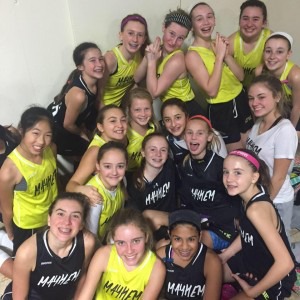 The Bolts came together as a team last Saturday to kick-off their 2016 season, going undefeated (3-0-1), scoring 18 goals, and allowing only 4. “The Bolts are all heart and hard work; they rely on each other to succeed and work together to overcome their opponents,” noted Main Line Mayhem Club Director and Coach, Alex McMahan.

The team is coached by Alex McMahan and Michelle Weaver.

Note: The photo includes both of Mayhem’s U14 teams– Bolts & Monsters.