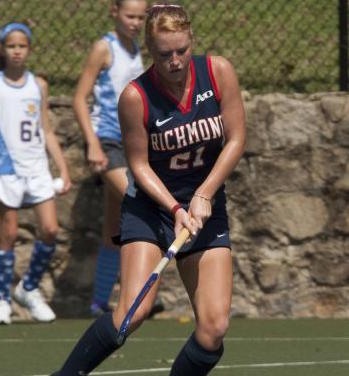 Starting in the fall of 2017, Coach Avery Safford will join fellow Richmond Spiders on the sidelines of the Main Line Field Hockey Club.  A decorated alumna of the Shipley School, the fall will also be her inaugural season as Head Coach at her alma mater.  During her time at Shipley, Avery’s team captured the Friends School League championship in each of her four years. She was named to the first team All-Friends League three times, the All-Main Line first team honors twice, and the All-Philadelphia All Star Team twice. With 52 goals scored her senior year, she broke the Shipley record for most goals scored in a season, and in the process became the highest scoring field hockey player in the school’s history. In addition to field hockey, Avery also played lacrosse and squash. Her lacrosse accomplishments include being named a first team All-Friends League selection, and twice chosen to the first team All-Main Line as well as a second team selection. At the conclusion of her senior year, Avery was awarded The White Blazer award, given to the best female athlete of her class.

While at the University of Richmond, Avery played a vital role in the team’s appearance in the Atlantic 10 Conference Championships all four years, winning it once, and going on to compete in the NCAA tournament.  While at Richmond, Avery earned the Scholar-Athlete Award, which is given to athletes who demonstrate outstanding academic achievement at the University, all four of her years there. During her senior season she was selected for the A-10 Conference All-Academic Team, which is awarded to the student-athletes for their high academic and athletic success. She was also honored as a National Field Hockey Coaches Academic All American.

Under the lights ✨There’s nothing better than

Mayhem’s Fall FUNdamentals is open on our websit

We finished up our second and final Grow the Game

Congratulations to Shae Wozniak on being named to

We are so proud of our athletes who created Mayhem

U-14 Mayhem Athletes competing at @usafieldhockey